62 Buckingham Gate uses natural smoke venting within its glazed facade to provide a free area equivalent to 2.5% of the floor area. The 11 variations of facade inclinations and cranked relationships with the building grid necessitated different rotations and orthogonal shaped unitised mullions.

Smoke vent to the left. Fixed light to the right. The varying vertical sight-lines are due to the skewed mullions, not the smoke vent.

To minimise the mullion widths we worked to maximise the free areas of the opening vents, whilst ensuring the operating forces remained within the allowable for manual operation. This eliminated the need for additional vents within the most inclined, most rotated frames where the geometry would have the greatest effect on the width increase. The reduction in required opening vents ensured that no two vents were directly neighbouring each other, also preventing unwanted increased mullion widths and reducing the externally visible structural silicone width. The four anti-slam gas struts, used to smoothly operate the window, restrain it when opened and conveniently providing a barrier for opened vents, were tested for redundancy. A tested vent prototype proved that one gas strut was sufficient to fulfil the purpose. 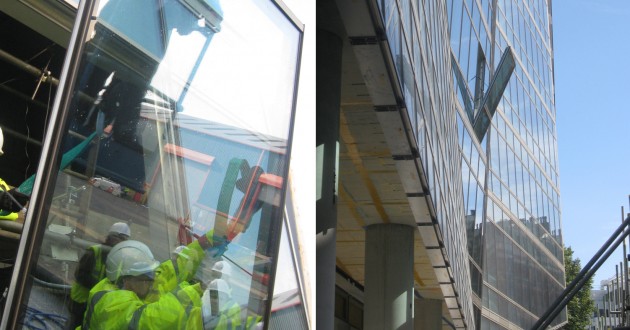 The elegant facade of 62 Buckingham Gate easily disguises the complexity of the engineering. However we were keen to push the concept to the forefront of the design proposals and discussions at tender stage. We worked closely alongside the system designers of Lindner Facades Ltd to achieve this visual consistency between adjacent mullions whilst protecting the usual design performance requirements of a high end bespoke unitised envelope. 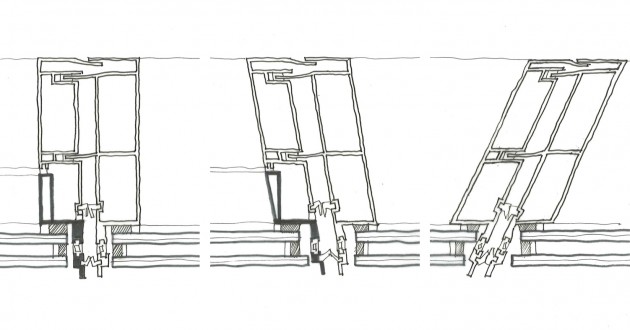 Smoke vent framing integrated into the varying mullion angles. Smoke vents were avoided in the most extreme mullion

The 3m full height glazed opening vents were required only every third unit and were excluded from corners, foldlines and the most inwardly inclined facet. Integrated within a maximum 122m wide unitised mullion, these were subjected to the full CWCT tests and met the same airtightness and watertightness performance as the fixed lights.